I have realized that I have overlooked one area of Disney, the Disney Afternoon. What brought this on? A few things, honestly.  First, I feel like I have entered a Nostalgia Phase. What is this? Well if you have listened to Doug Walker explain the creation of the Critc, he  said he was going through a Nostalgia Phase and picking and rewatching all these old shows from his youth. Lately, I have found myself doing that as I have been buying DVDs of Darkwing Duck, DuckTales, and Rescue Rangers.  Secondly, I have started my second collab. The Jim Cummings Collab, Jim Cummings  has voiced many cartoon characters especially for Disney. He was the voice behind Darkwing and I'll be taking a look at Darkwing but first I have decided that I want to do a Top 6 countdown of  my favorite villains from Darkwing Duck.

Now I believe that The King only appeared in one episode but still I thought he was a pretty memorable baddie. An Elvis impersonator who leads a gang stealing gold records and other music related using his guitar. I'd like that as you really don't see many music related villains.  Also another reason I think he is so memorable is because in his episode, "Paraducks",  Darkwing and Gosalyn go back in time to the '50s when Darkwing was just a little boy and we see that he is a wimp but with the help of Gosalyn and Darkwing, young Drake defeats The King and his gang. Making this the first villain that he ever took down. Besides being a music villian he was a nice change of pace compared to the other baddies that Darkwing went up against and come on a guitar as his weapon. That's cool!

Here is a villain that has a few screws loose. But that will happen when part of your brain is fried. He thoughts electronic appliances were bening enslaved by mankind and that they needed freeing.  Just like actual appliances he would charging and I just love the design of his costume, it is so funny. Besides being funny he was also pretty intresting and granted he actually came close to freeing the appliances only to have them turn on him. Also one has to wonder where he got that giant battery.

Quackerjack. Once a reputable toymaker who lost his business once video games hit it big He turned to a life of crime and built toys that could kill. If you think MegaVolt is unstable well Quackerjack is really unstable. He is a loon.  He has a little banana puppet that he talks to. Speaking of MegaVolt, Quackerjack has teamed up with MegaVolt on occasion to take down Darkwing. Honestly if I had to compare Quackerjack to any other superhero villains, I'd say he is a mix of the Toyman and The Joker from the DC universe. I say these two because he uses toys to fight and he is one demented little man. Losing his business really made him go cuckoo.

Steelbeak is someone who you can tell is a Bond inspired villain. He is very suave, and cool. This guy knows how to make an entrance when he goes anywhere. He doesn't get too upset unless of course his plans start to go awry.  He is definitely a great villain and one of the few semi down to earth villains on this show. As I said very suave and that's all there is. 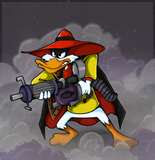 NegaDuck, Darkwing's evil doppelganger.  Now there are actually two different versions of NegaDuck. The first one created by MegaVolt when Darkwing's personality was spit in two with the overly kind and protective side and the evil side. NegaDuck 1 as he is referred to was the evil side. The other NegaDuck or NegaDuck 2 comes from an alternate reality known as the Negaverse where everything is backwards. The Villians are the good guys and vice versa. NegaDuck 2 became the more prominent NegaDuck as he led the Fearsome Five.  A group of Darkwing's greatest foes to try and over St. Canard.   NegaDuck is one of the comempet villains but he is ruthless and perhaps the most violent of all of Darkwing's foes.  Yep, I would  definetly say one of the most violent. I remember the first time I saw NegaDuck, boy did he scare me when he pulled out his chainsaw. which is his main weapon of choice.  As I mentioned there were actually 2 NegaDucks and if the show had gone into a fourth season, NegaDuck 1 and NegaDuck 2 would have teamed up in an episode.

My number one favorite Darkwing foe is Bushroot. It's hard to say why. Though part of it, I beleive stems from the fact that his backstory is rather sad. Here we have someone who was once a reowned scientist who was about to lose the funding for his projects. In order to prove they worked and he was right, he tested his project on himself and he became a plant/duck hybrid. In some regards it feels as though he didn't want to become evil but he had no other choice. The college where he worked didn't want him back and being a plant actually gave him power. Something he had never tasted before and got to the best of him. The one taste of power led to turn to a life of crime. He had no other choice. I find Bushroot to be the most sympatheic of all of Darkwing's foes. He was always being picked on by two of his collegaues because they were telling working with plants isn't real science and again as I stated earlier once he got that taste of power he was in heaven.


There you go, these are my Top 6 Darkwing Duck Villians. What are some of your favorites? Did they make the list? If not, tell me in the comments.

Also this list got mentioned on this site Cult of Cummings. A Jim Cummings fan site


The Cult of Cummings