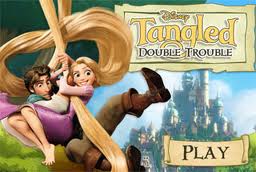 Trying something different here today.  I've never done a game review before. So, why not.   I've played this game Tangled: Double Trouble is an online game that can be found on Disney.com.   One that I really enjoy. Here's how I'll be breaking down, characters controls, levels, collectibles,  obstacles and then finally My Final Thoughts.  Also, there really isn't  a plot here, at best it's a side-scroller

You start off the game as Flynn.   And you'll be going back and forth between Flynn and Rapunzel.   Flynn really doesn't have any special moves in the game but again, this is just an online kid's  game.   I will be honest and say that I found Flynn's levels a bit boring.  They weren't bad but not giving him any other moves besides the generic jump stuff is a bit disappointing.

Okay, I really liked the Rapunzel levels so much more then the Flynn levels. Why, well this game took advantage of Rapunzel's hair and made it a tool in the game.  Rapunzel's hair  could be used as a whip to get from location to location or get collectibles that were too far out of reach to go up and get.   I don't know just giving Rapunzel that extra feature made the levels featuring much more enjoyable. Also you gotta love the fact that the game version of Rapunzel has Pascal on her shoulder.

Again, the controls are pretty basic but that works for this game.

Forward Arrow/Back Arrow  - These are used to run and I'll admit sometimes the characters can be a bit slow when running.

Up Arrow  -  Jump.    Pretty basic here. It can also be used to climb poles or ladders when you come across them in the levels.

Down Arrow -  Can be used to jump down to a platform below or to climb down  a pole or ladder.

Space Bar - This button has the most features in the game being 3.  The space bar can be used to hide from guards who you want to avoid.  If your near bushes in the first two levels,  barrels in the next, and flowers in the next, you can press the space bar and your character can jump behind and hide while you wait for the guards to move. I should mention that these seem to be the basic control set up for most Disney games because I played a Monsters Inc. game that felt just like this Tangled game but not as fun. The next feature that space bar has is that it can be used  to activate levers throughout the levels.  Now you'll need to do this quite a bit.  The levers have two features  The first feature the lever has is that it can be used to drop boulders on the guards to knock them out.  The second feature comes in towards the latter part of the game in the castle levels when you have to use the levers to open gates to get through the level to move on.  Now, these are scattered all over the place and they are sometimes hard to reach. Now the third feature that the space bar has is tied to Rapunzel and goes back to what I mentioned earlier. The space bar is  the button you need to use when you need to use Rapunzel's hair as a whip.  The biggest example of this is sometimes you may come across an area and the only way to access is by using Rapunzel's hair to jump, that's what you need to do.  Now in the beginning or if you are having troubles, the game will have arrows showing you the way.    Again, I know this makes the game seem easy and like it's guiding you but keep in mind, the intended audience for this  game.    Now as I did mention before sometimes the controls on the game can feel a little stiff but that doesn't happen all the time and I don't think it is the game that is causing that but even still,  I do like this game.

There are only 6  levels in the game. You could almost break them down into 3 pairs of two.   That's how I'll be doing it.   Levels 1 -2 are  The Forest, Levels 3 -4 are The Cave and Levels  5- 6 are The Castle.   The first two levels are the most simple in terms of both difficulty and look.  Difficulty is a bit understandable as these levels are meant to teach how to use Flynn and Rapunzel in the game.  So, I'm okay with the first two levels being rather easy but I don't know for a forest, why it does look like a forest, the look of it is a bit forgettable.    It does use great colors for a forest and it does look like a forest and as if it is something, you would see in the film.   The Cave levels are where the game starts to get a little harder as you'll be going all over the place if  you want to get the collectibles. I do enjoy these levels because while they are relatively easy, they can be a little challenging at times and they do make good use cave colors. Expect to see a lot of brown in this level.   Levels 5 & 6 are easily the nicest to look at because of the colors used to make it feel very royal such as pinks and purples.   It was so nice to look at and these levels can actually be a bit more of a challenge compared to Levels 1 & 2. Which is a good thing considering that they are the last two levels.   This does bring to two minor complaints I have with game.   The first one being that the entirety of the game, you go through the levels only playing as Flynn and Rapunzel. are never seen together in any of the levels.   I don't know why this bugs me but I feel like this game missed out by not allowing the players to control both Flynn and Rapunzel in the same level.  I seriously think this would be a great idea especially in the later levels.   This is probably minor but I do wish the people behind this game had thought of that.  Now my other complaint is that after the final level, the game just stops.  It really doesn't feel like there is a true ending to the game.   I don't know after playing through the levels, even if this game only has 6 levels,   I would've liked a more gratifying ending.    Maybe, I'm asking too much.

Wanted Posters/Flowers -   In the Flynn levels,  you'll be collecting wanted posters and in the Rapunzel levels,   you'll be collecting flowers.  I feel both of these make perfect sense for the characters. There are 20 of each that can be found throughout all 6 levels.  Now, I don't if anything special happens when you get all 20. Mostly because I have not been able to get all 20 of either. The closest I've come is in Level 5,  which is a Rapunzel level,  I got 19 flowers.  A little frustrating but I'm still trying to get 20 posters and flowers.

Guards -  Now I've mentioned the guards before. These are the only obstacles in the game but you want to make sure to steer clear of them. Because if you get caught by one of them,  you'll get into a cartoony looking brawl and then it's game over.  Now there are two ways to avoid  the guards. The first one is  the lever, I mentioned in the controls.   The lever in this method can be used to knock out the guards.  Again, you use the space bar for this. The second way to avoid them is by hiding.   behind bushes, barrels, or flowers. Once again to hide, you use the space bar.

Overall, I really like this game. It's not a perfect game by any stretch but for what it is, I do find it to be very enjoyable and one I would suggest to fans of Tangled. I just wish it was a little longer though. Oh well. This is probably tied for my favorite game on Disney.com. The other being Toy Story: Daycare Dash.  I hope you've enjoyed my first game review.  I know it wasn't perfect but still, I hope you enjoyed it.